A novel — regardless of what language it’s in — is a powerful literary platform that can teach readers about a time they can’t personally experience and tell a story that may be useful for life.

In Khmer class, we read and scrutinized the novel Mealea Doung Chet, novel set in 1939 about two lovers from two different countries with war.

The novel Mealea Doung Chet depicted the Khmer society back during the French colonial era. During that time, young men got the opportunity to pursue education, just like the male protagonist Tikheavuth. It was also a time when people in the rural area heavily depended on agriculture. In addition, the story took place during World War II which the protectorate France was also involved in. Besides, Cambodia and Thailand were in serious territorial dispute, and as a result, Cambodia lost a part of its land, but soon after obtained it back. Not only did the novel illustrated the economic and political aspect, but also the religious side. Mostly like today, Cambodians during that time heavily believed in Buddhism and other spiritual beliefs.

The legendary author Nou Hach mainly reflected love across different nations in the novel. The two young people, Tikheavuth fell in love with Chann Mony, from Thailand, despite the fact that she’s from an enemy country, and the love became mutual over time. However, the glory did not last when Thailand started invading Cambodia. Tikheavuth mistakenly accused Chann Mony and her family of being spies and their love terminated. Despite the challenges and distance they’ve experienced for years, the young lovers cleared the misunderstanding and reconciled when the war ended.

To see a summary of the novel in English, click here.

I’ve attended Model United Nations (MUN) a few times, but they were all in English. I believe most MUN conferences across the world are done in English. At Liger, we took it to the next level. The Senior cohort, an our Khmer Facilitator organized the first ever Khmer MUN! We had two general assemblies with two topics in each. The topics in my general assembly related to chemical weapon of mass destruction and internet privacy control, and I was the delegate of France. During the first two weeks, I did research about the position France stands in this two topics. In addition to that, I explained my to my classmates who were new to MUN about what it is and how it goes, and assisted them throughout the researching process. Researching in English already requires skills and doing it in Khmer was even more challenging. There were a lot of times when I needed to translate my research into Khmer in a professional way.

The conference happened on the 23rd of May. Everyone who attended dressed up formally to really simulate the experience. It happened all in Khmer and it was really great to see everyone’s involvement throughout the day; we delivered opening speeches and wrote effective resolutions. Special thanks to out Khmer facilitator who made this happen, and the Khmer staffs who helped us along the way. I couldn’t wish for a better first Khmer MUN! 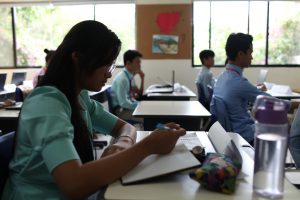 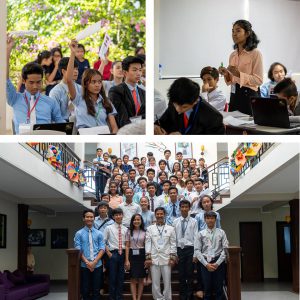 I think it is very important to have Model United Nations in Khmer. We are the future leaders of our country, and it is crucial we know how to address the world’s problems in Khmer in order to empower our people. I believe that Cambodian students should have the opportunity to do what we did with MUN, and if we can make that happen, it would be a big impact.

In Khmer class, we did a small research project about Pchum Ben since it was an upcoming ceremony for Cambodia. Pchum Ben is an opportunity for Cambodia people to consecrate to those who passed away.