In physics class, we had a fun and challenging project, which we researched the physics behind a superhero of our choice. So, learn why Ant-Man still has his super strength when he’s small with my writing below!

Dr. Hank Pym invented a suit that allows someone to shift size: to the size of an ant. He did so by using the Pym particle to create the “reducing serum.” The suit is made out of “unstable molecules and steel mesh.” Ant-Man gains his size-shifting superpower from this remarkable suit. This super suit is capable of reducing size, while remaining typical human strength. But there are something about it that’s far from reality.

Galileo created this law, which states “When an object undergoes a proportional increase in size, its new volume is proportional to the cube of the multiplier and its new surface area is proportional to the square of the multiplier.” In simpler words, if an object increases its size by two times, the volume would be eight times greater and the surface would be four times greater. This works the same way when an object shrinks: the volume would be eight times smaller and the surface would decrease by four times. This law also tells us that the strength associated with area and the mass associated with volume.

So if Ant-Man becomes the size of an ant, his area and volume would decrease accordingly. This would mean his strength and mass would diminish drastically! Since force link with mass, where did Ant-Man get his force to punch someone that’s greatly bigger than him when he’s the size of an ant? That’s quite far from reality. But if he breaks the Square/Cube Law and had his human-size mass, he would be able to maintain the force. That brings us to another problem. If Ant-Man has the same mass with a smaller volume, all the atoms would be compressed in a small size. He would be so dense that he would sink to Earth.

Then, how would that be possible?

Higgs field is the reason objects in the universe have mass. If an object experiences a harder time going through Higgs field, it has more mass and less difficult means less mass. If we can change that difficulty (changing the strength between the object and the field), we can change the mass.

On the other hand, we are able to change the strength between an atom and Pym field (discovered by Pym Hank in the Marvel comic), therefore, change the size of an object. But It’s difficult to shift size because we can’t easily remove or add atoms. We don’t know where would those atoms come from or go to, and how would we ensure that it will come back together when we want to get back to the original size.

The comic recommends that those atoms can be stored in the Kosmos dimension. Another suggestion would be to modify the constant that controls the size of an atom. For example, Planck’s constant, which determines the radius of the atoms, can become 10 times smaller, making the radius of the atom 100 times small. The radius is only one dimension of an atom; if all dimensions become smaller, the size would become millions of time smaller, according to the Square/cube law. However, the mass would remain the same, making Ant Man’s body really dense.

So, what would make it possible?

In order to make that happen, Higgs field and Pym field needs to work together to reduce the mass and size, respectively. So if the mass decreases, the size would also decrease to remain at the same density, but that would cause less strength. So when he needs to use his force, for instance when punching, Higgs and Pym field would have to disconnect. This means he could momentarily gain his original weight, and therefore, exert the same amount of force as he was his normal size. How Ant-Man can connect and disconnect between the two fields might have to connect with Kosmos dimension and Quantum Realm, where atoms can be stored.

Women in the STEM fields are usually ignored, and it is very important that we acknowledge them as we approach gender equity. As we heavily studied gender equity this term, in physics class, each of us researched about a woman in STEM of our choice. I chose to research about the influential Rachel Carson. Find out more about her with my writing below!

Silent Spring, the environmental science book about the negative effects of pesticide, was published on 27 September 1962. Rachel Louise Carson was the author of this book, and many other famous ones including The Sea Around , The Edge of the Sea, and Under the Sea Wind.

Carson was meant to be a writer; she started writing at a young age and won her first prize when she wrote her story for the St. Nicholas Magazine at the age of 11. As a teenager, she attended the Parnassus High School, and proceeded to Pennsylvania College for Women (Chatham University). With full scholarship, she shifted her major from English to Biology.

After succeeding University, Carson began her teaching career. In 1930, She taught zoology at Johns Hopkins Summer School. Later on in 1931 to 1932, she taught at the Dental and Pharmacy School, University of Maryland. She aimed to pursue PhD at Hopkins Marine Biology, but due to lack of finance during the Great Depression, she abandoned school.

To earn financial support for her family, Carson wrote 52 radio programs for the series “Romance Under the Waters.” In 1936. She was employed by the Bureau of Fisheries in the Department of Commerce as a junior aquatic biologist. At the same time, she started freelance writing and earn minor income.

Between mid 1930 to early 1940s, Carson has written articles and a book. In September 1937, she published her article “Undersea” in Atlantic Monthly. In between 1938 to 1939, she worked on her book Under the Sea-Wind. In the following years, Carson had written many papers and articles to many publishers, some of which are turned down.

In 1958, she started her book Silent Spring. This particular book was inspired by her friends from Duxbury, Massachusetts. This friend wrote a letter to The Boston Herald regarding the concern of bird dying because of pesticide spraying. She sent a copy of the letter to Carson.

Silent Spring took four years to complete. It included examples of adverse effects of DDT on the environment. Rachel Carson criticized the United States Department of Agriculture for spraying pesticide to kill fire ants. She stated they didn’t consider the negative effects it has on the environment. This book is a big accomplishment for her as well as the environment of the US. The government banned DDT because of her book. In addition, the creation of the Environmental Protection Agency was because of Silent Spring. On August 1962, this book was recognized by President John F Kennedy in his speech.

At the age of 57, Rachel Louise Carson passed away due to breast cancer.

Besides learning about equations and forces in physics class, I got an opportunity to research the physics behind everyday objects. I chose to research about a compass. Compass is a very useful object. This object is used for navigating in dense forests to the open underwater world. But what makes it work? This is when the magnetic field came in. 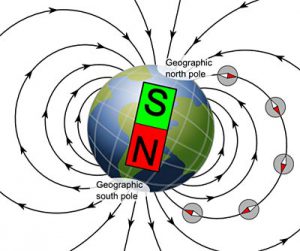 No one really knows exactly why there’s that magnetic field. But there’s a theory on that topic. The core of the earth consists of very hot iron and because of pressure, it’s solid. The movement caused by heat from the core plus the rotation of the earth cause the liquid outside that surrounds the core to move in a rotational pattern. It’s believed that this rotational forces create a weak magnetic field and attract the end of magnets, but only lightweight magnet can rotate and point north.

The needle of the of a compass is a lightweight magnet and that’s why the north needle is attracted to the magnetic south pole, which is the geographic north pole. The needle needs to be lightweight because the magnetic field is weak. If it were to be heavier, there wouldn’t be enough force for the needle to rotate.

Hope you enjoy this mini-lesson about the physics behind a compass!